A great way to get unwanted house guests to leave quickly - seat them in a prickly cactus chair!
A very quirky mix of Mexican and European style: Prickly pear chairs designed by Valentina Gonzalez Wohlers:

"The chairs juxtapose Mexican and European aesthetic values, incorporating the formal design elements and quirks of both to create a cultural blend. They are frivolous and humorous yet simultaneously encourage reflection and acceptance. Shapes, materials, colours, textures and finishes collide in irreverent and playful harmony; the Prickly pair chairs are a statement against prejudice and preconceptions. The classical French oval chair originated in the Rococo period during the reign of Louis XV and has since been adopted throughout central Europe. Although now completely familiar, its form was radical at the time - considered over-decorated nonsense which dispensed with rectilinear styles in favour of more light-hearted asymmetric forms. Rococo's naturalistic and exuberant ornamentation mixed natural and artificial forms of all kinds, from plant motifs to representations of the grotesque. The Nopal cactus symbolizes Mexican heritage and national pride. According to legend, the Gods told the Aztecs to build Tenochtitlan (now Mexico City) in the place they saw an eagle standing on a Nopal, devouring a snake. To this day, the image resides on the National Shield." Designersblock http://www.verydesignersblock.com/ 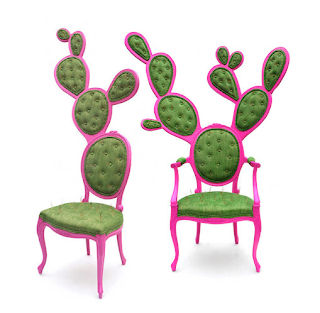 The Cactus Chair by designer Deger Cengiz certainly does not look too comfortable either. The designer notes that it is an interpretation to investigate the effect of visual data to the user's experience. The cactus gives a temporary discomfort even though the user knows that the cactus is not a real threat as it is behind glass. 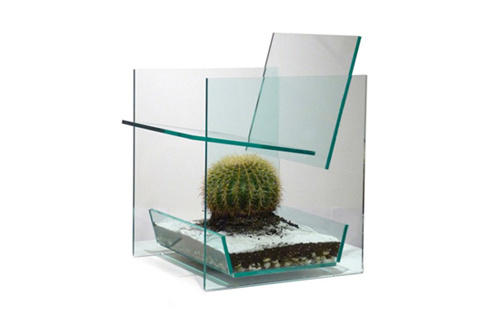